SUBLIME FRAGMENTS MOTION PICTURES
SUBLIME FRAGMENTS MOTION PICTURES is an upcoming film production group. It is a place where people related to any aspect of film-making i.e acting,writing,directing,music production,website designing,documentary film-making or having passion for any form of the art can come together,support each other and come up with something unique and interesting. It is a place where we share knowledge or our personal experiences or just anything under the sun. You can write a film review or talk about an old classic that you watched recently or a short film you came across and would like others to watch it. Film-making is a team work. Recall your days when you used to be a part of gully cricket in your colony.Someone used to bring the bat,someone would bring wickets and some would just bring themselves and be a part of the game. We believe in that.It is fine if you do not have any previous experience.What we are looking for is passionate souls.You should be wanting to be a part of something and be dedicated once you are a part of a project.We are looking for that urge. If you think you have that welcome to our group. 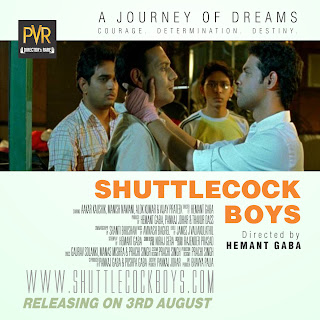 
"I do not know whether we are going to succeed. We might fail as well . But atleast we would have tried " .

How many of us take that one chance ?
To leave everything aside,to set out on a journey just for the love of what we want to do,without knowing where we might end up.We face challenges,things do not always work out.Sometimes we are on the verge of contemplating whether we had taken the right call.But we still go on,guided by sheer passion,devotion,love and dedication.

"Badha Chal !!Chala Chal".This is what the film portrays.A little googling up will get you articles about the film which reveals that the director himself faced similar challenges.Stuck up with a monotonous 9-6 IT job,with the love for cinema,with a burning passion to make films,not being able to find a producer and then finally leaving aside materialistic dreams ,pleasures and aspirations , pooling a huge sum of personal savings behind the film is what this valiant young director did.The story does not end here.The film footage caught a lab fire and quite a bit was destroyed. Finally with the grace of God this was digitally restored.

Shuttlecock Boys is a story of four friends Gaurav,Pankaj,Loveleen and Manav who bond over a game of badminton at night in their neighborhood.Gaurav is a credit card sales person not too happy with his job.Pankaj is a student preparing for his CA exams.Manav is a chef at a restaurant who has not been payed for months while the owner is out for a vacation.Loveleen on the other hand seems to be quite satisfied with his call center job.

Looked down upon ,avoided by some segments of the society and sometimes even friends Gaurav stumbles upon an idea that he and his friends should start something of their own.Now what should they do ?Middle class family backgrounds,no monetary capital or funds to back up,he plans to start with something low on initial investment which can later on grow.

Catering business is what Gaurav proposes. Initially laughed at ,termed impractical and his idea being dismissed by his buddies,Gaurav finally manages to rope in Manav and Pankaj ,who somewhere affected by their own mid-life crisis decide to join in.

Loveleen initially resisting the idea,coerced by the love for his friends and their enthusiasm finally gives in.

And thus the entrepreneurial journey begins.

Revealing the story beyond this point would be termed as "SPOILERS" , so I recommend you to explore it further.

Today just like the characters in the film with no business cards,no infrastructural setups or past experiences,here is a film from the debutant director.In an industry dominated by commercialism here is a gem of an independent feature film screening across theatres just next to a Bourne Legacy,A rising Dark Knight and some Gangs from Wasseypur.

This is a remarkable feat!

All this shows in the film and it deeply moves you. Why?
Because it's straight from the heart.With not an extra moment wasted on making subplots or concocted character sketching ,over-dramatization,this film moves at a pace keeping you engrossed all the while, lets you identify yourselves with the characters,befriend them and become a part of their world,emotions and journey.

The simplicity of this film is what stands out and gives it a distinct USP.

A fantastic film from Hemant Kumar Gaba and team ,this surely sends far reaching ripples in the new wave that has hit the shores of  Indian Cinema.


Rating : ( I don't consider myself qualified enough to rate films ).

Since when you finally watch it later,you would regard yourself as a fool to have given such a pure form of cinema a miss when it wanted your support as an audience.